This past weekend, Amy Parker was inducted into the IPFW Athletics Hall of Fame.  Currently, Amy is a physical education teacher at Central Elementary.  She also coaches 8th grade girls basketball and 7th grade girls volleyball at the middle school.  Amy was a standout girls basketball player at BGHS from 1995-1999.

Amy played for IPFW from 2000-2004 and she was named the 2003-2004 NCAA Division I Independent Co-Player of the Year.  She was also a three-time Independent First Team honoree.  She maintained double-figure scoring average during all four seasons with the Mastodons, including averaging 17.6 points per game as a senior.  Amy is second in career steals (224) in IPFW history, third in career three-point field goals (239), sixth in career points (1,572), and eighth in career field goals made (524).  She has the sixth-most single-season steals and seventh-most single-season three-point field goals made in school history.

Amy was gracious enough to answer a few questions for me regarding her time at IPFW and Beech Grove.

What does it mean to you to be inducted in your college’s HOF for athletics?

I feel truly blessed and honored to be inducted into the HOF of athletics at IPFW.

Did you ever think when you were done with your playing career at IPFW that you would be inducted into their HOF?

No, it never even crossed my mind.  I think that is why it means so much to me now. 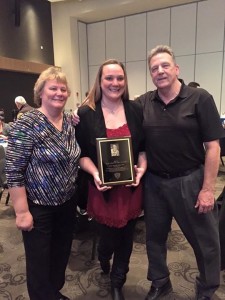 Amy with her proud parents after her induction into the IPFW HOF.

During your play career at Beech Grove, who or what got you prepared to play so well at the collegiate level?

I would say my coaches and teammates prepared me to play at the collegiate level but also would say the love and determination that I had to keep playing helped prepare me as well.

What’s your most fond memory from playing at Beech Grove?

My most fond memory from playing at Beech Grove would be the first game of my senior year when I scored 51 points and had 20 steals in a win over Indian Creek.

What’s your most fond memory from playing at IPFW?

Memories…..I could be here forever talking about memories and experiences that I had at IPFW but there are a few that stand out more than the others.  During my time at IPFW, we were transitioning from Division II to Division I (big difference) and I can remember we were going to Maryland to play the University of Maryland my Sophomore year.  We walked into the gym with 18:29 remaining on the twenty minute warm-up clock.  WHAT….how embarrassing is all I can remember!  But we had a few coaches and teammates wanting to tour Washington, DC since we were so close but the tour took longer than expected.  The other memory that stands out more than the others was getting the chance to play at Notre Dame!  Playing at Notre Dame was a great experience for a little school transitioning to Division I. 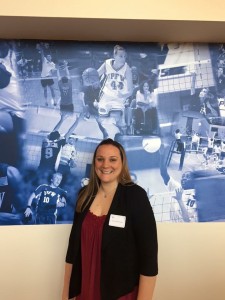 Amy standing below an image of her playing basketball for IPFW.

You currently coach the 8th grade girls basketball team, do your players know that their coach was a really good basketball player?

Your older sister, Katie, won a state championship at Beech Grove, played at Purdue, and in the WNBA…but who would win the one-on-one games in the driveway growing up?

My younger sister did win a state championship at Beech Grove, played at Purdue, and in the WNBA and overseas professionally…and she would win a one-on-one game!  She is awesome and is now coaching at Marian University turning young ladies into great basketball players but even better ladies!

Amy is a perfect example of what being a Beech Grove Hornet is all about.  Beech Grove is lucky to have Amy as a teacher, mentor, and coach! 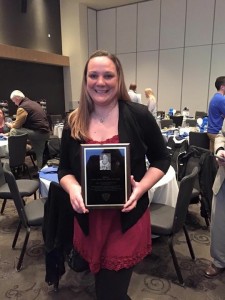 Congratulations to Amy Parker for being inducted into the IPFW Athletics Hall of Fame!