Wanted to share with you some of the great news coming out of the BGHS athletic department:
Friday, October 14     BG varsity football pounds former Mid-State foe Mooresville by a score of 49-21
Quarterback Chase Andries erupts for 420 passing yards, 5 touchdowns, along with 1 rushing touchdown and 63 yards. Tailback Walter Ballinger rushed 16 times for 100 yards and a touchdown. Senior wideout Montrez Hearon was unstoppable, catching 8 passes for 250 yards and 4 touchdowns. 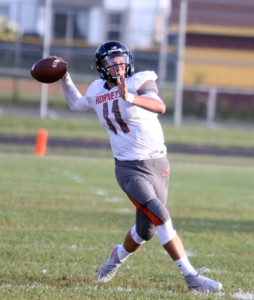 The Hornet defense was also on the mark, pitching a shutout until the 2nd half last night.
The victory is number 7 on the season (7-2), the most victories for a Hornet football team since 1989. Additionally, the win marks the first time BG has defeated Mooresville in football since 1996. 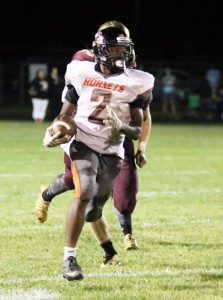 Next up for the Hornets: First round of the IHSAA sectional @ Lebanon (7-2), Friday, October 21st, 7 pm.
Boys Cross Country: Today the boys sent 3 runners into the IHSAA regional at Rushville High School; all of the boys ran great, two of them performing well enough to advance into the semi-state next weekend.  Juniors Conner Kelley and Tyler Ramsey continued their great seasons, running amongst some of the fastest runners in the state today at Rushville. For their efforts, the boys advance into the semi-state next Saturday at Blue River Park in Shelbyville; race time is 3:45 pm.
Congratulations to all of our athletes and coaches, and best of luck next week!
Sep
19