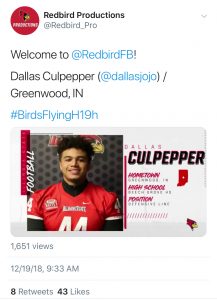 Dallas did not play his senior season after recovering from a knee injury he suffered last winter during basketball season.  Even though his injuries prevented him from playing his senior season, Dallas stayed positive and continued to support his teammates and coaches during the practices and games.  Dallas is looking forward to playing college football and plans to make an impact on the defensive line for the Redbirds!

The Beech Grove athletic department and the Beech Grove football program are very proud of Dallas and look forward to his future success as a collegiate student-athlete!