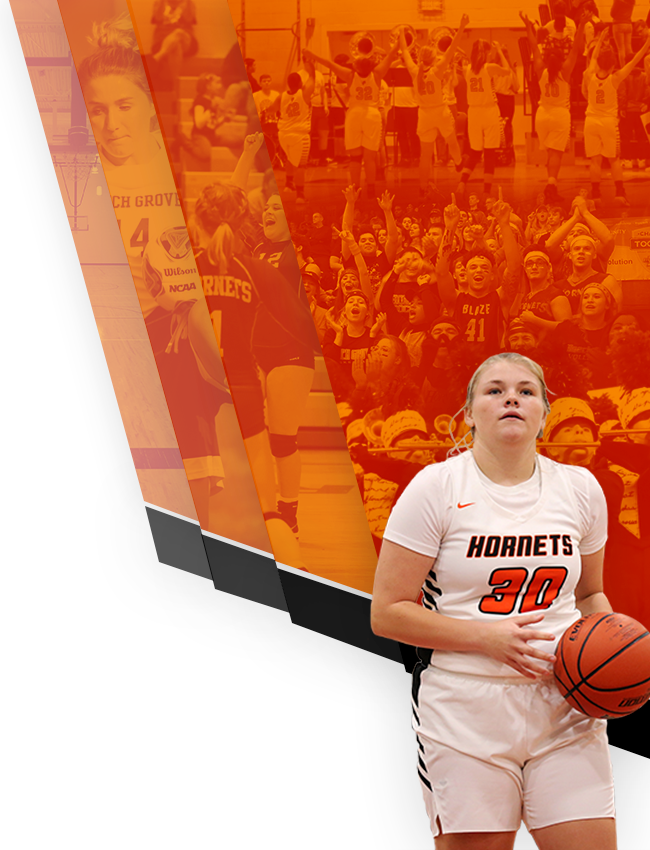 On January 4th senior student athlete, Josh Fryar, played in the Army All-American Bowl.  The all-star event aired live on NBC and highlighted 100 of the best high school senior football players in the country.  Being selected as a player in the All-American Bowl is a huge accomplishment and Josh Fryar described it as honor to be a participant in the week long event.  Besides the game, which is actually just a small part of the whole experience, the opportunity provided a window into what these players will experience as they enter into high profile programs.  The week included practice sessions, service opportunities, press conferences, photo ops, and an autograph session at the end of the game.

Josh is no stranger to attention.  He is what most people would classify as a “Big Boy”.  Walking down the halls at Beech Grove High School he stands at about 6 ft. 6 inches and weighs in at close to 300 lbs.  Beyond Josh’s physical stature, he has received a lot of attention for his performance as a top tier offensive lineman.  Early in his high school career he caught the eye of many D1 colleges, and as he closes out his senior year at Beech Grove, Josh has committed to play football for Ohio State University.  However, Fryar was blown away by the fan response after the game.  The crowd got to rush the field and players were surrounded by young fans wanting autographs.  Josh said, “The were asking for everything.  I had kids asking for my shoes, my helmet, and even my jersey.  It was a lot of fun being able to sign autographs and feel what players experience at that higher level.”  Adding to the attention, nine other all-stars playing in the bowl game have committed to Ohio State.  NBC shot a promo with half the players chanting OH and the other half adding the IO.  Ohio State had the most recruits playing in the bowl game of any other school and that put an even bigger spotlight on those players.  Off the field Fryar and other players participated in a service opportunity where they visited a local children’s hospital.  Josh spent the day meeting patients and talking with them about their stories, sports, and common interests.  It was the variety of the fans, football, and the off-the-field experiences that made this week so special to the players. 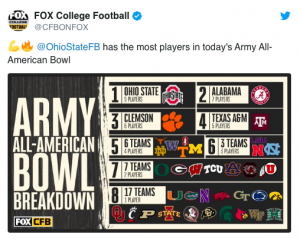 Leading up to the game Fryar really enjoyed the time to get to know the other athletes playing along side him.  Fryar stated, “It was just a great time talking with the players and sharing our stories and experiences.”  Among those players was another Indiana standout from Zionsville, Gus Hartwig.  Josh was also joined by three Indiana coaches who helped lead the East all-stars.  Jayson West and Rob Roberts both coach at Warren Central High School and Jason Simmons is at Ben Davis High School.

Once the game was over and all the fans went home the week started to sink in.  Fryar reflected, “It was an amazing opportunity to get a feel for what players experience at that level.”  The All-American Bowl proved to be more than just an all-star game.  It was a boot camp that provided a glimpse of what will be expected of these athletes as they work to make a name for themselves at the next level.  A level where the stakes are higher, the attention is broader, and the competition is tougher. 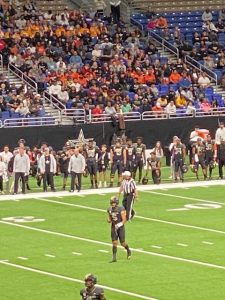 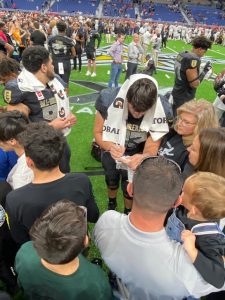 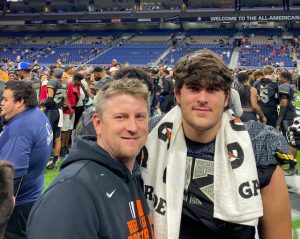 Check out Josh Fryar in action during practice.  Video starts at 1:46.

See Fryar in action on the OL for the East team.